Not the Dalai Lama

There is an urban legend of sorts circulating through the healing arts profession regarding a CD, often distributed with a note attached claiming that the CD contains a healing chant by the Dalai Lama, which he initially refused to allow a recording of, but later agreed to on the stipulation that the recording never be sold, only given. The CD contains what sounds like a somewhat poor cassette recording that has been transferred to CD. There are numerous tape dropouts and distortions, with one channel louder than the other (a dead giveaway of some transfer to/from cassette and that it was played back on a different unit than it was recorded on, or at least with a slightly different head bias).

I did a little digging on the Internet when I went to go look for this recording, having had a desire to do what I could to clean up the sound as best I could in Sound Forge, at least to give it decent equalization and balance and to try to clean up some of the clipping (it was at some point in its life recorded such that the levels were too high and the audio saturated the recording device's inputs).

Through this digging I learned that the recording was actually supposedly of a Dutch man named Hein Braat, on a CD for commercial sale called "The Gayatri Mantra". The track selection in question that starts on the bootleg CD is called "Mrityonjaya Mantra". The letter accompanying the bootleg calls the disc the "Maha Mrityunjaya" Mantra.

To me the sample on the Isabella Catalog site sounded strikingly similar to the recording on the bootleg disc. I reported this fact to my Hendrickson Method of Orthopedic Massage class.

One response I got was that although the chant was the same, the voice sounded different. And that is actually true. It does sound different. The reason it sounds different is that it was recorded on one cassette player and played back on another one when it was transferred to CD. Cassette players are notorious for having poor accuracy in their playback speeds. They're meant to be 1.875 inches per second, but there are all kinds of tiny variances.

To see if it is indeed the same voice, I loaded the CD into Sony Media Software's Sound Forge, a professional-quality sound editing tool. Figuring I needed to correct a tape speed problem, I applied a tiny amount of pitch shift, without compensating for speed. I sped up the recording by 76.0 cents, which is 76% of one semitone (and there are 12 semitones to an octave). This is roughly equivalent to correcting for a cassette tape running at about 1.75 inches per second, or about 6% too slowly. I did this pitch shift by ear. For anyone who knows me well, that's about as good as you'll get. (I can't visit karaoke bars or watch American Idol because anything that's even slightly off-key hurts my ears.)

Next I used the Sound Forge spectrum analysis tool on one "Om" from each source. They did not come from the same "om" in the same place in the chant (rather, I just used the first one I came to in each) but each is the same pitch. I turned up the accuracy to a FFT (fast fourier transform) size of 32768, which is certainly adequate for a single voice in the 0-22050 Hz range. Here are the two graphs for comparison. First the bootleg CD: 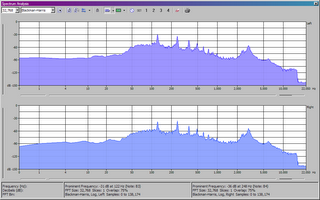 Next, the sample of the professional CD from the online store: 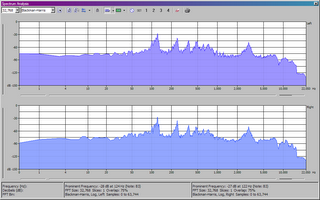 Keep in mind that the bootleg CD suffers from heavy dropouts and distortion from spending some portion of its life on cassette. But notice the peaks in the singer's voice. These harmonics are different for every person's voice. We would certainly expect to see peaks for each note that was actually being sung, but the subtle characteristics are the most interesting things. Look, for example, at the peaks that appear between 1,000 and 2,000 Hz. No note in this frequency range is being sung in the "Om" syllable, so these are pure vocal harmonics, characteristic of the singer's voice.

Much as I'd love for the Dalai Lama story to be true, I'm convinced that it is false.