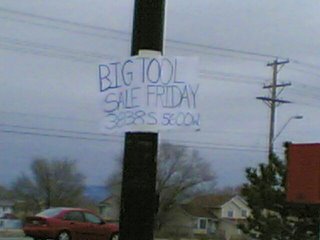 Okay before anyone accuses me of being homophobic or hateful, let me point something out for anyone who doesn't already know me: I am the gayest thing since Boy meets Boy. So if anything, in creating this thing, I'm poking a little gentle fun at myself. I think it's important to be able to laugh at yourself, especially when the world is doing its best to shit on you.

So for all my beautiful gay friends out there, and for all of those wonderful heterosexuals who stand with us in opposition to discrimination, I bring you Gay Voice Number One for your Tomtom. If you don't have a Tomtom, then this is of no interest for you. But you should get one. They're great.

Gay Voice Number One is me doing my sort of "southern gay" impression. Yeah, it's a bit cheesy. It's a little bit sloppy, because I was still learning how to do a Tomtom voice while I was doing it. It still came off pretty well, considering. It's really weird hearing my own southern gay voice coming from my Tomtom, but it makes me smile and sometimes even chuckle.

So show your solidarity with your fellow gay, and make your Tomtom gay too. Installation instructions are included in the zip file linked above. Please don't ask me for technical support. I don't have sufficient time or energy for it. And if you want to link to the Tomtom gay voice, please link to this blog entry rather than directly to the file. Thanks! 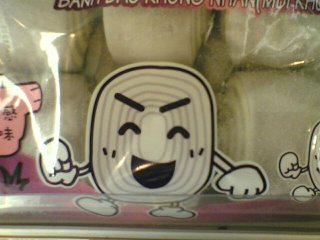 I have some mixed feelings about the results of this election, as anyone who paid attention might expect. The one thing that's common to all my impressions of it, however, is a feeling of relief that it's all over. I'm sure everyone was getting really tired of hearing about it. I know I was.

The good news is that for the first time in 8 years, the country will have a real leader, not a semi-sentient, mouth-breathing redneck who, after 8 years as president, still cannot pronounce the word "nuclear" correctly. The Democratic party has picked up a number of seats in Congress, but hopefully not enough to give them a 60-vote majority in the Senate by the time all is counted. I say that only because I don't think either party should ever have a filibuster-proof majority in the Senate at the same time they control the House and the presidency. It's a good thing to have long-running debates in the Senate to keep things from moving too far in one direction or the other.

I'm disappointed in California for voting for Proposition 8, albeit by a very narrow margin- 52 to 48. This is a far cry from the margin by which Prop 22 was passed many years ago, which tells me that things are trending in the right direction overall, even though it'll take us a while to fix the damage done by Prop h8. It's a bit puzzling how things ended up deviating so far from the direction the polls were trending. The simplest explanation is that all the polling houses will tell you that initiatives are extremely difficult to predict with polls. A more complicated explanation might be some kind of Bradley Effect in Prop 8 polling.

My own county overwhelmingly rejected Prop 8, though curiously my own precinct approved it by a razor-thin margin of 276 votes to 272 votes. More people voted for the proposition by mail than did on election day, which might suggest (if it were a statewide trend) that though things had started trending in opposition to Prop 8, they started trending that way too late, after absentee ballots had already started coming in.

In any case, I think what's likely to happen now is a court challenge on the grounds that the language of Proposition 8 amounts to a constitutional revision rather than an amendment. There's a good argument to be made that this is the case. I think it's a bit ridiculous that the civil rights of a minority can be put to a simple majority vote in any state. That process is antithetical to the very foundations of our democracy, which, given the history behind the Bill of Rights and the structure of the Senate, was crafted to ensure the majority could not simply run roughshod over the rights of minorities.

There is one thing I can say about Proposition 8 that the proponents of the hate amendment cannot say: I did not have to lie. My conscience is clear. I can sleep at night knowing I deceived no one. The Prop 8 people managed to scare the pants off a lot of voters by weaving a web of lies. Sadly, many were deceived by their treachery. If any of them have consciences, they will have their wickedness weighing heavily upon them for the rest of their days.

I can also say that the liars behind Prop 8 did not win without the biggest fight the nation has ever seen. Let it be known that the gay community won't be rolling over and taking it. They may have won (and just barely), but they burned through over $30 million in the process. Welcome to your Pyrrhic victory, assholes.

And that's the real shame of this proposition too. Imagine if we had worked together instead... we could have raised in excess of $70 million for a common purpose like feeding the hungry, caring for the sick, housing the homeless, or educating the young. But instead, the Mormons decided from their bully pulpit in Utah that it was of the utmost importance to engage in political gay-bashing of the highest order, and all of this money was wasted, incinerated so they could engrave their hate into California's Constitution.

(If any church ever really deserved to lose its tax-exempt status, it's the Mormons. It's plain for all to see now that anti-gay politicking is a primary objective of their organization.)

So I am disappointed in my state for making a bad decision, but not sad. I'm not sad, because no matter what the "Church of Jesus Christ of Latter Day Saints" does, they will never take away the love my partner and I share. No ballot proposition can ever change who I am or who I love.

And you Mormons had better be wearing running shoes if you ever come knocking on my door.

UPDATE: The ACLU, Lambda Legal, and the National Center for Lesbian Rights have declared their intention to challenge Proposition 8 on the grounds that it is an invalid attempt to use the initiative process to revise rather than amend the state constitution.

Notice that my Head is Not in the Image 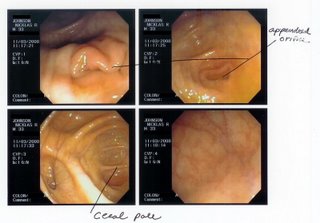 My colon is as pristine as a spring-fed mountain lake.